On a sunny, summer afternoon in 2003 my family was preparing for an addition. My mom was pregnant with my sister, but that’s not what we were adding that day. We were in our white minivan headed to a farm, where there were three golden labs for sale. Mom and dad had decided we could pick one. Instead, we picked two. I cried the entire way home because I felt bad for leaving the third sister there alone. The two new members of the family reacted differently than I did. They barfed in the backseat of the car. We named them Skippy and Sugar, and boy did we have fun.

We wrestled, played catch, and kept mom busy at the washing machine with our grass stained pants. Skippy and Sugar became part of the family, very quickly.

The next 13 years would be a bit different. We fenced in most of our large backyard for Skip and Sug, painted them a dog house, and set up a heater for them. Michael and I loved the decision at the time. We now had an outfield fence for backyard baseball, which was like winning the jackpot.

Feeding and watering the dogs became a chore for us as we grew up. We’d go out there at night, often after mom or dad reminded us, would play with them for a few minutes before filling their bowls, and head back inside. While we were at school, soccer practice or Younglife, Skip and Sug were inseparable. They never missed a beat. When one went to get a checkup from Dr. Dixon, the other wailed for the half-hour the other was gone. The sisters had never been without one another.

They certainly had their adventures together, too. My brother broke his foot during a sledding accident in our yard one snowy day when I wasn’t quite double-digits yet, so my family took him to the hospital. Although this tale has grown from year to year, I was somehow left with two dogs who had escaped from their kingdom. After some hypothermia, I finally got them back in their fence after approximately 4,568 hours. My buddy Ben Gold let them out on accident one day, but after a few loops around the block they were back inside the fence. The last time they got out they didn’t make it out of the backyard before they returned inside. They knew their home by now.

It’s wild to think of the things they witnessed over the years, sitting back in their dog house. Hundreds of basketball games with the occasional fist fight over a foul called. Barbecues and parties. Phone calls at midnight. Tears. Smiles. Laughter. Sugar and Skippy saw it all. They were with me from Jefferson Elementary to the day I left for college.

Today my brother called me to tell me Sugar died. She was out behind the dog house on the ground. Old age. Skippy was OK, he said. Hopefully she’ll be fine.

Sugar, though, will be missed. Those two different colored eyes that freaked everyone out. That tongue always hanging ajar. The impulse to roll on her belly to get some love as soon as someone opened the fence. She was a good girl.

Say a prayer for our family, and one for Skippy, too. See you soon, Sug. 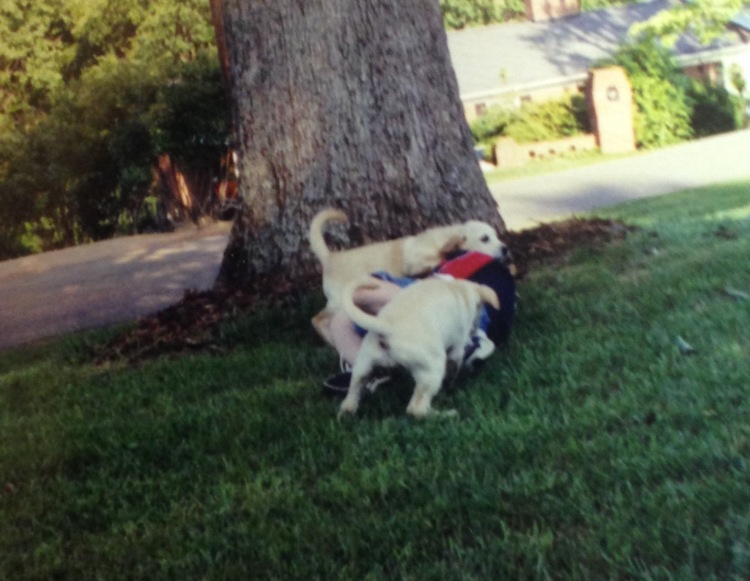 One thought on “Sweet as Sugar”